p>Nice one! ‘Friendly fire’ reaches the nadir! The USAF have just dropped a bomb on John Simpson and a convoy of US special forces

Simpson: ‘So there are Americans dead. It was an American plane that dropped the bomb right beside us – I saw it land about 10 feet, 12 feet away I think. This is just a scene from hell here. All the vehicles on fire. There are bodies burning around me, there are bodies lying around, there are bits of bodies on the ground. This is a really bad own goal by the Americans. We don’t really know how many Americans are dead.’

Presenter: ‘John, just to recap for the viewers, an American plane dropped a bomb on your convoy of American special forces – many dead, many injured?’

Simpson: ‘I am sorry to be so excitable. I am bleeding through the ear and everything but that is absolutely the case. I saw this American convoy, and they bombed it. They hit their own people – they may have hit this Kurdish figure, very senior, and they’ve killed a lot of ordinary characters, and I am just looking at the bodies now and it is not a very pretty sight.’ 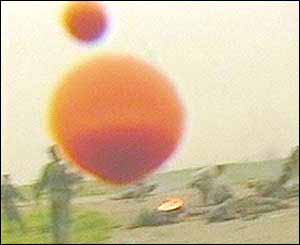 (context: John Simpson is one of the BBC’s top reporters in the field. Apparently, Ted Koppel would be roughly equivalent in stature in the US.)

Sarah Carey notes some interesting aspects of the NYTimes coverage of the incident:

Unsurprisingly, the rumour mill reports that the British ‘Desert Rats’ are now painting the stars and stripes on their vehicles, to avoid yet more ‘friendly fire’ incidents…

Propaganda: FARK’s Photoshop Phriday this week is on the theme of how Fox News would have covered events in history. Some hand-picked works of genius: