In response to this post regarding Ireland’s piracy rate of 42%, Simon pointed out a possible flaw in the methodology on the forum;

‘Although they could be comparing high software usage to negligible software sales in Ireland. Anyone with a half decent purchasing dept will buy from the UK or US to avoid ridiculous euro pricing. Compare prices on the Macromedia Store’s shop, Studio MX in International English for $899 in the international store, $1133 in the UK store, or $1180 in the Euro store (all prices ex-taxes).’

So I took a look over the weekend. Here’s the page on the survey. In the PDF, page 12-13, they describe the methodology. my comments:

Dublin: the new bridge just down the road from my house has finally been completed — in time for Bloomsday it seems, since it’s named after Joyce. Obligingly, the Dublin traffic camera operators have got a great night shot of it: 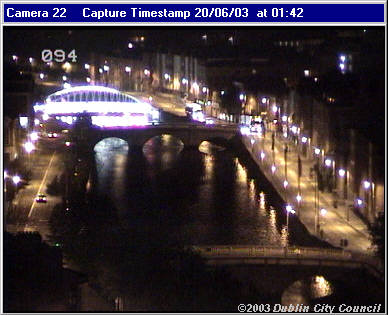