Funny: Some of the taint.org readership (that’s you, Nishad) may be familiar with BEST SONG EVER.mp3 — it’s an insane, 10-minute workout: one guy ranting at a high pitch in some east-asian language at an incredible speed over some cheesy Casio, hardly taking a breath, punctuated by bizarre 7-Zark-7-style ribbits and squawks. By the end of it, he’s nearly hoarse. It is incredibly bizarre. Turkopop has nothing on this. 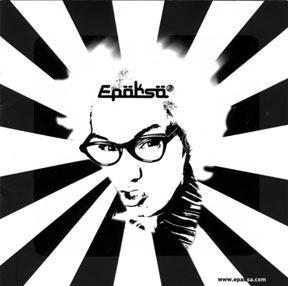 Well, it’s origin has been discovered — he’s called E Pak Sa, and the style is called ‘Pansori’. His version is a modern take on this ancient traditional style — ‘While singing, he would imitate the sound of all of the instruments used in the prelude and interlude, and even the sound of the whistle used to gather the tourists.’ From there, he grew in popularity, especially in Japan:

‘Sell-out concerts, myriad television appearances, riots at in-stores, and Japanese teens speaking Korean are all products of E Pak Sa’s impact in Japan. E had infiltrated the popular culture of Japan and paved the way for other Korean artist to do the same.’

And guess what — his Encyclopedia of Pon-Chak album can be listened to online! The YMCA cover — track 2 — is strongly recommended.