The Life of a SpamAssassin Rule

Spam: during a recent discussion on the SpamAssassin dev list, the question came up as to how long a rule could expect to maintain its effectiveness once it was public — the rule secrecy issue.

In order to make a point — that certain types of very successful rules can indeed last a long time — I picked out one rule, MIME_BOUND_DD_DIGITS. Here’s a smartened-up copy of what I found out.

This rule matches a certain format of MIME boundary, one observed in 17.4637% of our spam collection and with 0 nonspam hits. Since we have a massive collection of mails, received between Jan 2004 to May 2005, and a rule with a known history, we can then graph its effectiveness over time.

The rule’s history was:

So, we would expect to see a drop in its effectiveness against spam in late May 2004 and onwards, if the spammers were reacting to SVN changes; or post September 2004, if they react to what’s released.

By graphing the number of hits on mails within each 2-hour window, we can get a good idea of its effectiveness over time: 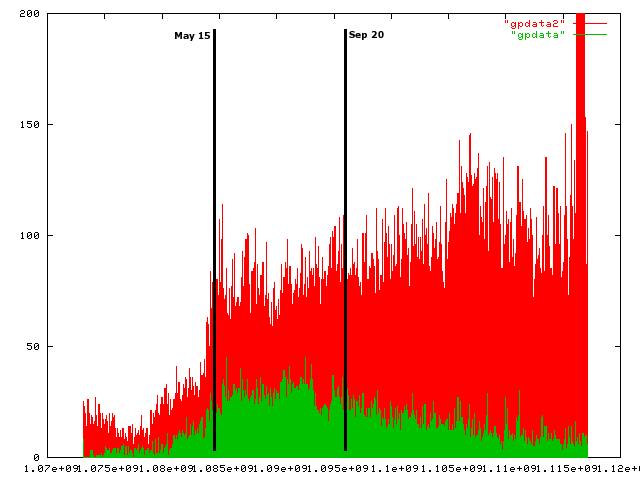 The red bars are total spam mails in each time period; green bars, the number of spam mails that hit the rule in each period. May 15 2004 and Sep 20 2004 are marked; Jan 2004 is at the left, and May 2005 is at the right-most extreme of the graph. (There’s a massive spike in spam volume at the right — I think this is Sober.Q output, which disappears after a week or so.)

It appears that the rule remains about even in effectiveness in the 4 months it’s in SVN, but unreleased; it declines a little more after it makes it into a SpamAssassin release. However, it trails off very slowly — even in May 2005, it’s still hitting a good portion of spam.

Given this, I suspect that most spammers are not changing structural aspects of their spam in response to SpamAssassin with any particular alacrity, or at least are not capable of doing so.

To speculate on the latter, I think many spammers are using pirated copies of the spamware apps, so cannot get their hands on updated versions through ‘legitimate’ channels.

Speculating on the former — in my opinion there’s a very good chance that SpamAssassin just isn’t a particular big target for them to evade, compared to the juicy pool of gullible targets behind AOL’s filters, for example. ;)