I love these pictures: 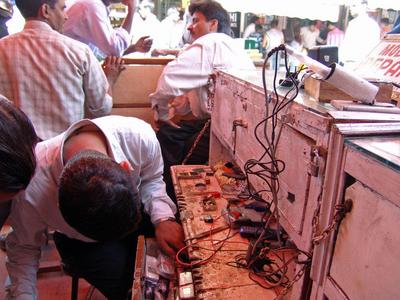 I link-blogged that article ages ago, but I keep thinking of it, so it’s worth a proper post in its own right, to expand on that.

These guys work at an Indian mobile phone repair stall in Karol Bagh Market, in Delhi. The blog entry notes:

As in China, many of the mobile phone shops and street kiosks offer mobile phone repair service. Many of these guys can strip and rebuild a mobile phone in minutes. … a lot of the hyperbole surrounding western hacker culture makes me smile compared to what these guys are doing day in day out.

Also, a commenter notes: ‘in india, for about 1$, you can convert a CDMA phone to GSM !! also, they can unlock phones and do a veriety of hacks for little money.’

There’s so many lessons I’m getting from it:

I think this is one of the most important lessons I learned while travelling through India and SE Asia a few years back — the developing world is using high tech, and it’s not using it in the same ways we do — or even the ways we anticipated, and we have plenty to learn from them too.

Found at Jan Chipchase’s site, which is full of great contemplation on this stuff. (The story on Seoul’s selca culture is nuts, too — it’s like Flickr^1000.)

(PS: I have a wisdom tooth extraction scheduled for next Friday… wish me luck. That’s another thing you don’t want to happen in the developing world, although I daresay it’d rock in Bangkok!)

(Update: clarification — my cite of Ethan Z was meant as a compliment ;)