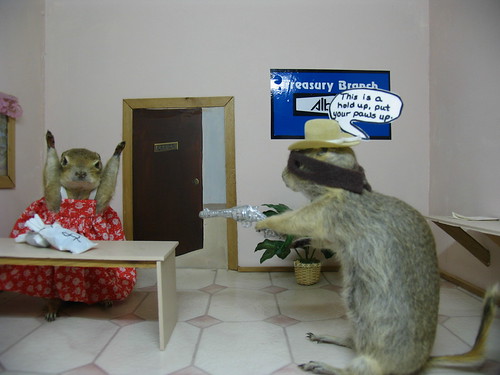 Oh, the irony. According to The Sunday Times, a body called the Motion Picture Licensing Company sent letters to 2,500 Irish playschools (aka kindergartens), demanding payment for children watching DVDs on their premises — a fee of EUR 3, plus 17.5% VAT, per child per year:

Playschools have been given an unexpected lesson on copyright law after a company representing Hollywood studios demanded that each child pay a fee of €3 plus 17.5% VAT per year to watch DVDs in their playgroup.

The Motion Picture Licensing Company (MPLC), which collects royalties on behalf of companies such as Walt Disney, Universal and 20th Century Fox, wrote to 2,500 playschools last month warning that it is illegal to show copyrighted DVDs in public without the correct license.

The letter was sent with the approval of the Irish Preschool Play Association (IPPA), which represents the schools and their 50,000 children. The MPLC had wanted €10 plus VAT per year for each child, but the IPPA negotiated for the lower fee.

Unsurprisingly, playschool owners are freaking out:

“To be honest, when I got the letter with the IPPA newsletter I laughed and binned it,” said Paula Doran, manager of Kiddies Korner, a community playschool in Shankill, south Dublin. “If we brought in something like that the parents would have to pick up the costs. But I don’t like the way they went about it — once you signed up they’d automatically take money out of your account every year.”

“I don’t think too many judges would come down hard on a playschool over this,” she said. “We would rarely show DVDs anyway because it’s frowned upon — kids get enough TV at home. The odd time we would pretend to go to the cinema. We give the children tickets and they watch 20 minutes of Snow White, Fireman Sam or SpongeBob.”

Here’s the funny part — it appears the MPLC failed to take note of its own legal requirements, and is not legally licensed to issue shakedown demands for fees in Ireland:

The MPLC had failed to register with the Irish Patent Office as a copyright licensing body. Under the 2000 Copyright Act, royalty collectors such as the Irish Music Rights Organisation (IMRO) and Phonographic Performance Ireland (PPI) are required to register before they can collect fees. A spokesman for the Patent Office said that if an organisation collects money but hasn’t registered it may be fined or staff may be jailed if a complaint is made and it is found guilty.

Crazily, it sounds like the IPPA didn’t find this out from their own legal advisors:

Irene Gunning, IPPA’s chief executive, said she was disappointed with the MPLC. “We acted in good faith with this organisation and felt we were doing our members good by negotiating them down from €10 per child,” said Gunning. “I feel misled by them now. It is only through an alert mother that we became aware that they need to be registered.”

oh dear. Let’s hear it for alert mothers, I guess. Anyway, expect more similar shakedowns once the MPLC get their little licensing oopsie sorted out:

The MPLC only began operating in Ireland in recent months, after setting up in Britain in 2003. It is also targeting other sectors such as coach operators, which occasionally show movies in public.