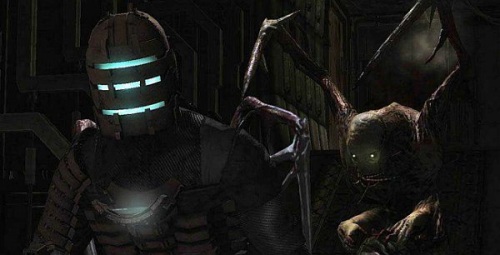 In the bold and often-bloody Dead Space, gamers step into a third-person sci-fi survival horror experience that delivers psychological thrills and gruesome action. Set in the cold blackness of deep space, the atmosphere is soaked with a feeling of tension, dread and sheer terror. In Dead Space, players step into the role of engineer Isaac Clarke – an ordinary man on a seemingly routine mission to fix the communications systems aboard a deep space mining ship. It is not long before Isaac awakes to a living nightmare when he learns that the ship’s crew has been ravaged by a vicious alien infestation. He must fight through the dead silence and darkness of deep space to stay alive.

I absolutely love this genre. If you ask me, Resident Evil 4 is one of the best games ever written; perfectly paced, with some truly terrifying villains, plot twists and tension-laden surprises along the way. There’s no experience in computer gaming quite so viscerally terrifying as the first time you hear Dr. Salvador’s chainsaw revving up in the distance, while trapped in a farmhouse under siege from an army of blood-crazed cultists…

So I got Dead Space last Friday, and have been playing it over the weekend; it’s good. Problem is, it’s not as good as RE4, but then, when you’re up against the best game ever, that’s going to be hard to avoid. Actually, to be honest, the first couple of stages feel very reminiscent of RE4, tending towards derivative. Stage 3, however, comes into its own, with flavours of Aliens. Fingers crossed the upward trend continues…

Reading the comments on a Slashdot thread about the game, I came across this tip:

I’d say this is the last game that scared the shit out of me. The fact that you don’t have any health bar, and that your vision, hearing, and even your heartbeat and breathing pace are affected by the situation can really frighten you. I don’t think this game got enough credit. I still haven’t finished the game yet.

Here’s a nice 10 minute video that gives you the general feeling of the whole game. (minus the 320×240 resolution and lossy quality of course). If you get bored skip to the middle.

The video is pretty compelling, so I did some research. It seems the game is still playable on XBox360, albeit with some wonky sound samples during dialogue. Sounds ok to me. I went onto eBay, and was able to find a copy for 8 UK pounds. bargain!

When I twittered about this, I got these responses:

Me: “Call of Cthulhu” 2005 Xbox title, apparently one of the most terrifying games ever written: 8 UK quid on eBay. woot.

Myles at 2:00pm October 23: You won’t be saying woot when your sanity dwindles and you gnaw off your own fingers in an attempt to protect yourself from the Great Old One. [a fair point]

Andrew at 6:56pm October 23: Have you ever played Eternal Darkness for the Gamecube? Really really creepy, and as close to Cthulhu as you can get without paying royalties.

Síofra at 9:06pm October 23: Eternal Darkness – feckin’ brilliant. My first videogame addiction and I remember it fondly. The darkness comes….

So I looked up Eternal Darkness: Sanity’s Requiem, too. check this review out:

Resident Evil, this game is most absolutely not. What it is, however, to dedicated players who fully explore its length and intricacies, is one of GameCube’s absolute best games, and indeed one of the greatest titles we’ve ever played. […]

There are insanity effects — hallucinations that have a major role within the game. […] if a character’s sanity bar drops too low, strange things will begin to happen. Very strange things sometimes. These occurrences are sure to set the dark mood of the adventure and have an impact on the play experience. Going insane too much can create unwanted obstacles for players and in doing so may also endanger one’s health and magick supplies. Some of the insanity effects we’ve encountered have proven very disturbing. Some even attempt to pick at the mind of the player outside of the game universe.

Apparently the walls drip with blood when you start losing your mind. Awesome! IGN gave the game 9.6 out of 10, Metacritic gives it 9th position, 92/100, “universal acclaim”, on the all-time high scores list for the Gamecube, and of course, it’s playable on the Wii.

Rosco has already promised I can borrow his copy. Sign me up! Looks like I’ll be scaring the crap out of myself for a while to come…