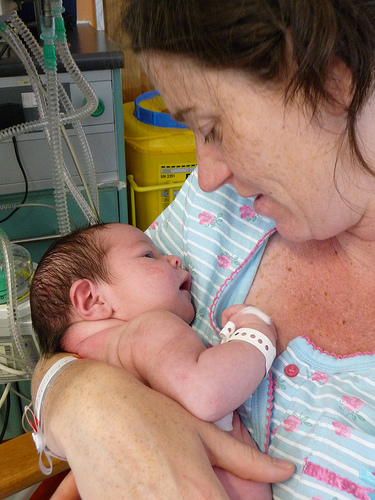 Well, that was a really scary few days.

On Monday, the lovely C was nearly 2 weeks overdue, and was scheduled to come into the Rotunda for induction the next morning; then contractions started on Monday afternoon. We were happy, as avoiding induction was good news for a natural birth, allowing the process to be run through the excellent Domino scheme, etc.

So we went in, arriving at the Rotunda ER for 3.45 or so. They put on the CTG to monitor the baby’s heartbeats, and the first 3 contractions were strong, but everything seemed OK. The next one, however, the baby’s heart rate dropped dramatically — to a very low 40bpm; I called the ER nurses, they ran in, put C on oxygen, and that seemed to help, returning the rate to normal — but on the next contraction the baby’s heart rate dropped even further. Once that happened, the shit hit the fan. In seconds C was on a trolley heading for surgery. It was clear this was serious trouble.

I was left standing outside the theatre while she was operated on — as an emergency Caesarean section there was no time for luxuries like hapless husbands stumbling around the background. Probably just as well. The midwives and surgical staff kept me as well informed as was possible, though.

After a terrifying 10 minutes, the prognosis improved a little. Initially they were worried that the baby had put pressure on the cord, but this was discounted — in fact the baby had emptied its bowels of meconium in the womb, which irritated it enough to cause enough distress and cause its heart rate to crash. After 10 minutes, the baby was out (and was a girl!), and C was going to be OK at least. however the baby was at quite a lot of risk from aspiration of meconium and possible brain damage due to reduced oxygen in the womb. holy shit. :(

The baby had indeed aspirated some meconium, causing a collapsed lung. Over the next couple of days in an incubator in the neonatal intensive care unit, the little mite had surgery to introduce a chest tube into her pleura to re-inflate the lung, and was treated with a variety of treatments to deal with meconium in her stomach.

The best bit was this afternoon when we got news that the results of her cranial ultrasound were in — all clear, no brain damage. Then C got to feed her and hold her — and she latched on like some kind of milk-seeking missile. what a little trooper.

Anyway, with any luck, 2 or 3 days from now they’ll both be able to come home in one piece.

We were lucky btw — if we hadn’t been in the ER at the time, it was very unlikely that the prognosis would have been anywhere near as good. And I have to give credit to the Rotunda staff, they did a great job.

Update, 7 June: C was released from hospital yesterday, and Mae got the all-clear this morning. We’re now all back home, healthy and in one piece. Now we can just get on with the usual second-child excitement-slash-drama! phew!