Update: here’s the first bug, spotted in Apple’s “thank you for registering your Mac” mail:

Bea picture of the week

Another super-cute photo of Bea, from the latest batch. Nowadays, my photos are all-Bea, all of the time…

Sorry to readers of Planet Antispam — it had stopped updating for a week, after the server move. I’d forgotten to restart the cron job… now fixed.

View from my kitchen window

We just moved house last week, and this is our new back garden.

It’s a little overgrown right now, but to be honest, I quite like it like this — as do the cats…

About the title change

The eagle-eyed may have spotted a change that took place a month or two ago in the taint.org configuration — I ditched the old weblog tagline.

Previously, this weblog was titled “taint.org: Happy Software Prole”. This title had been in place since around October 2003, when Daniel Lyons wrote a particularly idiotic article for Forbes entitled “Linux’s Hit Men”, which I took umbrage to:

Here we go again — the old ‘free software is communism’ line […] The article goes on to bemoan how software companies who write proprietary extensions into GPL-licensed software, have to comply with the terms of the license. It’s all a bit of an obvious dig — but I am looking forward to the follow-up article — that’s the one where the author bemoans how commercial software companies send out their ‘enforcers’ to extort money from companies who don’t bother paying the royalties and runtime license fees their licenses require.

As an free/open-source-software guy, I happily adopted ‘happy software prole’ as an absurd tagline, in the spirit of detournement. Fast-forward to 3.5 years on, however, and I’d say most people can’t even remember the Forbes article, or that Daniel Lyons guy! So that tagline was a bit old and busted, really.

On top of this, I’d noticed something I do in my weblog reading — I’ve started renaming blogs in the feed reader from their fancy title, to simply the name of the author.

I’ve found that when reading blogs, I’m interested in who’s writing. When skimming through the feeds of a morning, having to spend 5 seconds to recall that “ByteSurgery.com” is Robin Blandford is just a wee bit superfluous, sorry Robin. ;)

As a favour for readers, I’ve saved them the trouble, and renamed the blog to be quite explicit about who’s writing; the taint.org tagline is now just “taint.org: Justin Mason’s Weblog”. Let’s face it — it’s a bit functional. Hopefully it’s helpful, though!

(And finally, it gives me the edge in the ongoing Google war against the non-me “Justin Masons” out there… and against a heart surgeon and a Texan basketball player, I need it. ;)

Myself and Tom were in a taxi last night, stopped at a stop light, when I noticed something odd.

A girl, about 20 or so, walking along the path stopped beside a bag of recycled rubbish, and bent over as if she was tying her shoelace. Instead of fixing her lace, though, she quickly ripped a hole in the (transparent) plastic bag, grabbed a crumpled Fanta can, and walked off.

WTF? anyone got any theories?

Coworking.ie is a new community-driven coworking group-blog and promotion site, set up by Jason Roe.

Coworking’s a pretty cool idea — ‘a movement to create a community of cafe-like collaboration spaces for developers, writers and independents.’ Great news for us teleworkers.

I’ve subscribed — it’ll be interesting to track development of this concept, in Ireland and elsewhere…

RFID chip in a UK passport 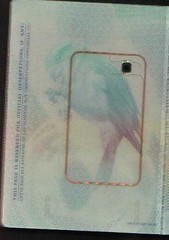 Found over at this UK blogger’s site. So RFID passports are now deployed in both Ireland and the UK…

Outside My Window Right Now

Bubba, now safely back in Dublin after his 8000-mile flight from LAX, is getting back into exploring his old manor.

Here he is, ignoring a very brave magpie. Judging by the way the magpie was brazenly hopping around him, cawing, and the way that Bubba was ignoring him, I suspect there may be a nest nearby….

Looks lovely, doesn’t it! Well, here’s the view in the opposite direction. ;) We got a great reminder of the mercurial nature of an Irish April. This panorama captures the whole story.

I was just emailing with Sarah Carey, and she correctly noted that my weblog has been tending towards the techie-incomprehensible recently. A brief look at the front page confirms this.

So here’s a remedy: a photo of the delicious ham which the lovely C cooked up for Thanksgiving, last Thursday. Just look at that, mmmmm!

When I get back to Ireland, I will be bringing Thanksgiving with me; a holiday based around eating cooked fowl, with no religious baggage whatsoever? I’m so there.

Yep, they really are that easy to scratch, it seems.

The NY Times story on “life hacking” is a pretty good one, and an excellent intro for anyone who hasn’t been religiously reading the changing transcripts of Danny O’Brien’s talk and so on.

Mann has embarked on a 12-step-like triage: he canceled his Netflix account, trimmed his instant-messaging “buddy list” so only close friends can contact him and set his e-mail program to bother him only once an hour.

Reminded me of something I ran into recently.

Last month, I switched from Sawfish, the venerable UNIX window manager, to GNOME’s Metacity, which is the new(ish) GNOME standard window manager. (I was tired of some long-standing Sawfish crashes, and didn’t want to be the last Sawfish user on the planet, which was seeming increasingly likely.)

One interesting UI change is that application windows no longer ‘pop up’ — if an app wants to notify you of some important change, it instead can only cause its taskbar button to subtly pulse in the corner of your screen.

Initially, this threw me for a loop, and I rudely (albeit accidentally) ignored my friends on IM and suchlike. But I quickly got the hang of glancing at the taskbar once in a while when I wasn’t concentrating on a task; it’s now second nature, and has significantly reduced the number of interruptions I find myself experiencing in a typical day.

BTW, in passing: switching WMs is a big deal, user interface-wise. One of the key gating factors, for me, was a feature I use to control windows without laying hands on the dreaded rodent — namely, a ‘move window to screen corner’ keyboard shortcut. This patch implements it for Metacity.

I implemented this last year for KWin, too, to resounding disapproval and bitchy comments about how I’m using the mouse all wrong. Meh. I fully expect the Metacity maintainers to throw it out, likewise, leaving me hand-patching WMs for a while yet ;)

I’ve just finished Sir John Sulston’s inspiring book about the Human Genome Project, The Common Thread, in which he discusses how he found himself on one front line of the battle between intellectual ‘property’ maximalism attempting to grab ‘property rights’ over the human genome, and the common good, preserving such rights for all humanity and unfettered research. (Thankfully, he — and therefore the latter side — won.)

I’ve been meaning to post a few choice quotes here about it at some stage, but haven’t had the time — I’ve had to just limit myself to correcting the Wikipedia entry for the Human Genome Project instead. ;)

Anyway, Sir John is in the news again, as part of a new international initiative — the Adelphi Charter:

Called the Adelphi charter, it is an attempt to lay out those principles. Central among them are the ideas that policy should be evidence-based and that it should respect the balance between property and the public domain, not eliminate the latter to maximise the former.

Very encouraging to see something taking off at this level. I hope it does well, and I hope Ireland and the EU’s lawmakers take note, since I’ve been hearing a lot of IP maximalist party-line from there recently…

I Agree With Goopy 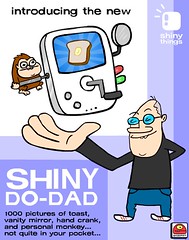 It’s the kind of plot twist that will send some critics screaming into the aisles: Why not let writers patent their screenplay ideas? The U.S. Patent and Trademark Office already approves patents for software, business methods — remember Amazon.com’s patent on ‘one-click’ Internet orders? — even role-playing games. So why not let writers patent the intricate plot of the next cyberthriller?

So in other words, a law grad called Andrew Knight actually wants to see the world RMS described in his ‘Patent Absurdity’ article for the Guardian, where Les Miserables was unpublishable due to patent infringement. Incredible.

He himself plays the classic lines, familiar to those who followed the EU software patenting debate:

Knight agrees, up to a point. He won’t reveal the exact details of the plots he’s submitted to the Patent Office, other than to say they involve cyberspace. And he says patents would apply only to ideas that are unique and complex. But he worries that without patent protection, some Hollywood sharpies could change ideas like his around and pass them off as their own.

”I’m trying to address a person who comes up with a brand-new form of entertainment who may not be a Poe, may not be a Shakespeare, but still deserves to be paid for his work,” Knight says. ”Otherwise, who will create anything?”