The PVR hardware sits in a case like this:

The actual model number for this type of case is apparently a Sun 811 Type Case, which that page notes as:

The story so far: see FreevoHardwareBuildLog.

2005-04-10: After doing some homework and refreshing my secondary-school physics, I realised I needed an AC-DC converter that could do 5A. So that evening I went to Fry's and Radio Shack -- no sign of any AC-DC converters that can push out 5A. So www.mini-box.com it is;

drat. but still, I picked up lots of components, a soldering iron, and bits and pieces anyway to make a power switch and a power LED at Fry's

I considered buying a Dremel cutter at Home Depot, but didn't in the end due to price ($60!)

After getting home and getting some food, I get out the soldering iron and gin up a power LED attached to a jumper; given the time since I last did this, I think I did a pretty good job! This page is a pretty good guide: http://case-mods.linear1.org/case-mod-101-led-swap/ (naturally I found that page afterwards of course.)

I also bought a batch of Fry's "motherboard stand-off hardware set" (threaded brass spacers with washers and nuts) and an "ATX-style push button power switch", which was nifty, as I was expecting to have to solder one of those to a jumper lead myself. These all got set up on the board.

Next task: stripping out the internals of the Sun Exabyte 8500 tape drive. The tape drive itself is easily removed as a single chunk -- unfortunately, I then have to totally disassemble it to get the front panel off. But by the end of that process (note: required a small Torx screwdriver, along with the usual flathead and posidrive ones) I have the enclosure's casing, top and bottom parts, with the two parts of the front fascia of the tape drive itself, separate. 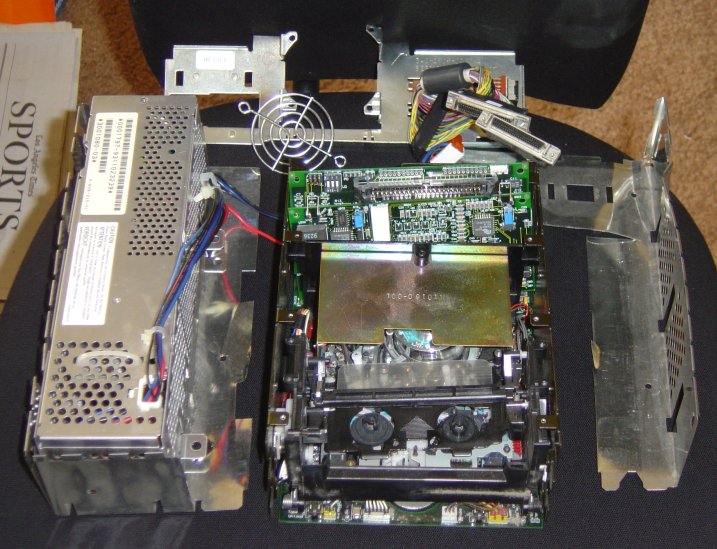 The next thing to do is to see if the components fit... I'd measured it up against the board itself previously, and it, of course, fit just fine with plenty of room to spare.

What I hadn't considered though, was the hard disk... duh. With the EPIA board inside the case, the hard disk doesn't fit in a flat position; so it would have to be installed on its side. That would be fine, except even on its side, it doesn't fit! (The HD is 4" across, and the casing is about 3.8" internally.)

Initially, I consider cutting a hole in the bottom of the case to permit the drive to poke through. That seems pretty daunting, since I hadn't sprung for that Dremel

It also seems likely to be ugly and kludgy, probably involving a layer of duct tape holding the drive into the box... nasty. Leave it for the night to sleep on it.

2005-04-11: Sleeping on it certainly helped. I realised that there's no reason the drive had to be in either a strictly vertical or horizontal position -- why not put it in at an angle?

Sure enough, with the board in place in the back-left corner of the case, there is plenty of room on the right hand side for the hard drive, as long as it's on its side at an angle from the vertical. The lid of the case will close with the hard drive in place, with about 0.5" clearance between the CPU's heatsink and the bottom of the drive.

There's still a question as to whether it'll fit with the PW-200-M power supply board on the ATX power socket. Looks very likely, though.

How to hold it in this diagonal position? Handily, there was a hollow pit in the lower half of the Exabyte case that's the perfect size to hold two biro caps

They do a fine job of holding it in position, allowing a little bit of flex when the lid is closed.

Another possible issue will be heat dissipation, since this is quite close to the CPU. We'll just have to see how that goes; it may be necessary to get a fan in there somewhere...

But all in all, this is looking like a workable fix.

It takes a little bit of head-scratching to think of a way to stop the drive from accidentally falling onto the heatsink, or, worse, a live pin on the PW-200-M board. However, I eventually realise that two caps of a Bic ballpoint pen are just the right size to fit into a convenient hole in the case's bottom, and hold the drive in place. At least, that should work until I can think of a more reliable, permanent way to keep those separate

The next trick: assembling the two parts of the front panel fascia. This is pretty easy -- when in Home Despot, I picked up a tube of silicone sealant (GE "Silicone II Househould Glue" fwiw). Silicone sealant has the great properties of (a) drying quickly, (b) being rubbery and non-brittle, so resilient to little knocks, (c) having good surface tension so it can stretch across small gaps. All in all, it's perfect for the job, and I use it to glue the two pieces of the fascia together.

First, I use a strip of sellotape to hold the "door" in correct position relative to the surrounding fascia, taping the tape across the front of the two pieces. Next, I flip it over, place it face-down on the table, and apply sealant to the top and sides, bridging the goop between the door and fascia. Leave it to dry for the night.

Finally, I remove the internal RF shielding from the bottom of the case. The entire Sun tape drive enclosure is fully RF shielded with a thin plate of steel; I want to maximise the space I have internally, and I'd prefer the nonconductive properties of the plastic instead of the grounding properties of the plate. So I rip it out of the bottom part. Unfortunately, this exposes a grid of reinforcing struts with hollow holes between them, which I don't want in one part, since I want a solid bottom for one of the mainboard's stand-offs to stand on.

So using scissors, I cut out and retain a small section of the plate. Sealant glue time again, and I glue it in place to the bottom of the case, stand a couple of heavy things on it, and leave it to dry for the night.

But what's this -- the temperature is hitting 65 deg C?! 'A C3 in an EBGA package is rated up to 85 degrees, although in practice a running machine would reboot or freeze at around 70-75 degrees.'

Yikes. It gets even hotter with the case on... take a look at this log:

Handily, I'd removed a 60mm fan from the Exabyte 8500 tape drive earlier. That fit nicely and a little snippage allowed it to be hooked up to the 5V output on the PW-200-M power board.

note: lm_sensors reports all sorts of wrongness for the temp at the high end. 77 deg C (BIOS) = 96.1 (lm_sensors). oops. Easily fixed though with a bit of googling.

another forum post: BIOS runs CPU at 100% so temperature during normal use should be lower

VIA Eden ESP datasheet notes that functional operation is guaranteed iside: Operating Junction Temp (Tj): 5-90 deg C Op Case Temp (Tc): 0-85 Tj is what's measured by the BIOS I think: 'The junction temperature of the die can be measured by using the processor s on-chip diode.'

so upshot -- we can push CPU temp as far as 90 deg C without *too many* issues... I would of course prefer cooler, especially given that I don't want the HD to get too hot.

Sure enough, doing this provided enough juice to get the fan running fast enough to bring temps down to a running average of 47 degrees C, and a hard disk temp of 32 C, with max load spikes of 74.1C/33C. That's perfect!