This demo was my proudest moment as a Commodore 64 demo coder and graphician.

Unfortunately, the disk loader used on the disk image didn't work for me on VICE version 1.20; so what I've done is captured a snapshot using 1.22. It can be loaded using VICE 1.20 at least, so hopefully will work on other versions too: Rhaphanadosis.vsf. (Apparently it works fine with version 1.21, however, so it may be just 1.20 and earlier that causes problems.)

Naturally, it's written 100% in 6502/6510 assembly. Worth noting that I developed this using an Action Replay cartridge's built-in monitor; it had an assembler, but one which didn't support symbolic addressing. In other words, every piece of assembly used hand-computed branch offsets, and every variable and subroutine was tracked -- on paper -- by memory location, rather than using symbolic labels. If you want to know what the monitor was like, the VICE built-in monitor is almost identical!

Now for a guided tour of the demo.

First off, there's a decompression step with some colour bars, then some random-looking scribblings on the screen, expanding the intro screen out of the compressed data. Once that completes, it's on to: 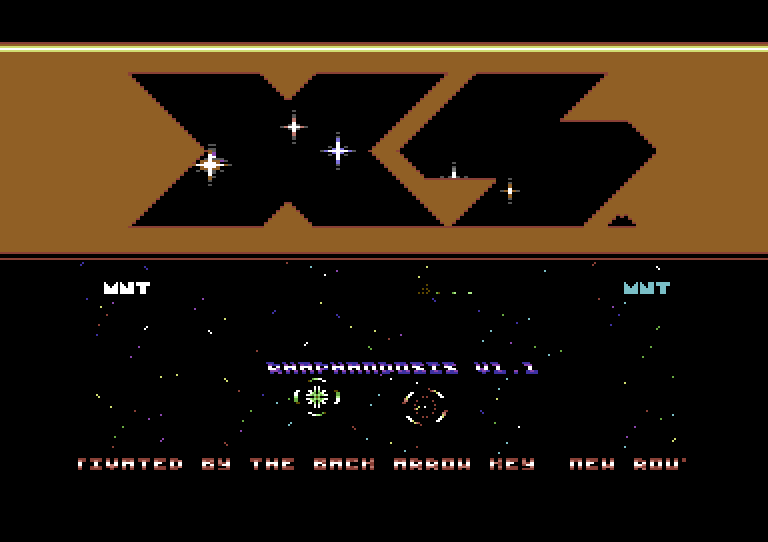 This is the standard Mantis/XS intro, used in all our demos with Excess -- Rob Hubbard 'Delta' soundtrack, scrolling starfields, some high-res colour effects, and a demo title and scroller. I go into a good bit of detail on this on the Stercoraphasia page.

(The title claims this is version 1.1, but I don't think there was a release before this, so that can be ignored.)

The scroller is by Exocet, and mentions that every part of the demo has something that can be controlled with the joystick in port 2. He notes that 'as far as we know, this demo is the largest single-load in existence (8 parts including intro and interludes)' and refers to an 'Amiga-res raster' (that's part 6).

Hit space and it noisily expands another stage of the demo: 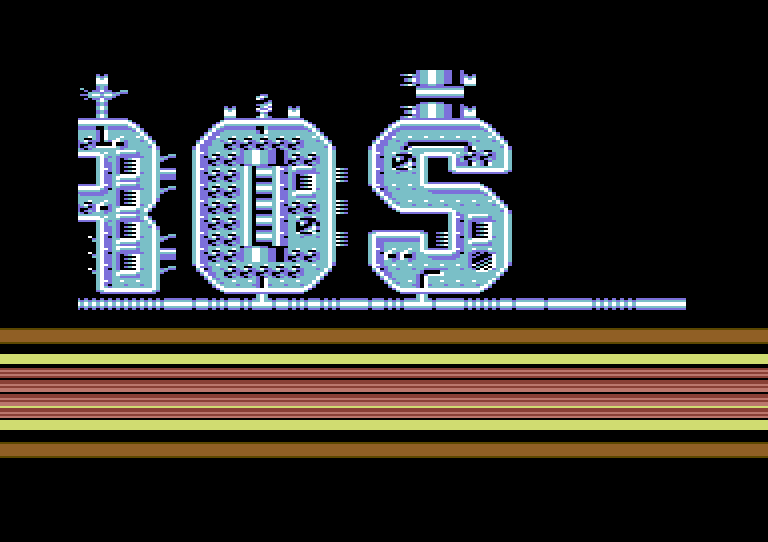 This features a huge scrolling text, taking up half of the screen with some extremely-detailed animated letters, heavily influenced by the graphic style of the ships in Sanxion, zooming past.

Joystick controls: up/down change the colour of the text; right will pause the text's motion, allowing you to appreciate the detail in the animation of the installations on the "ships". 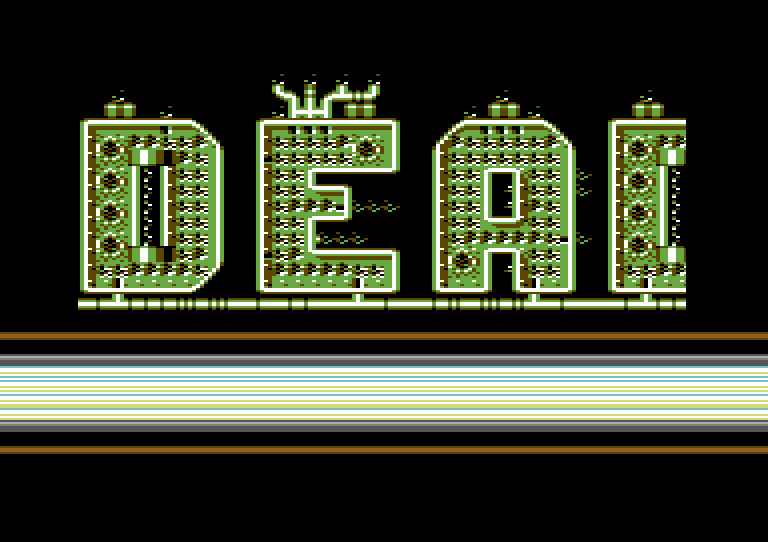 The scroller is largely a guest appearance by a friend under the name of Captain Deimos; lots of random chatter and antics. (We were teenagers, so it's pretty silly stuff

Once you're bored of that, hit space and the animated letters are destroyed, moving onto: 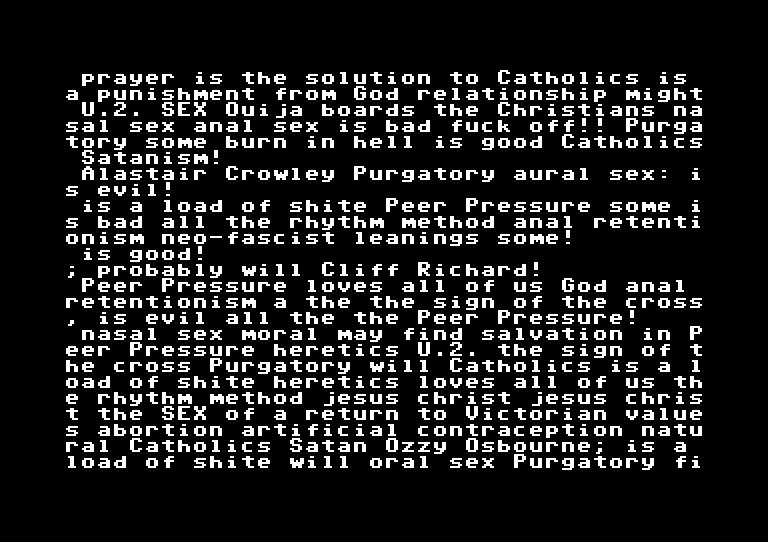 Wow, I was pretty sick of religion class at school by this stage, I guess.

It's a random-text generator in the vein of Dissociated Press.

Hit any key *but* space to decompress the next stage, displaying some puerile humour for a few instants, and move on to: 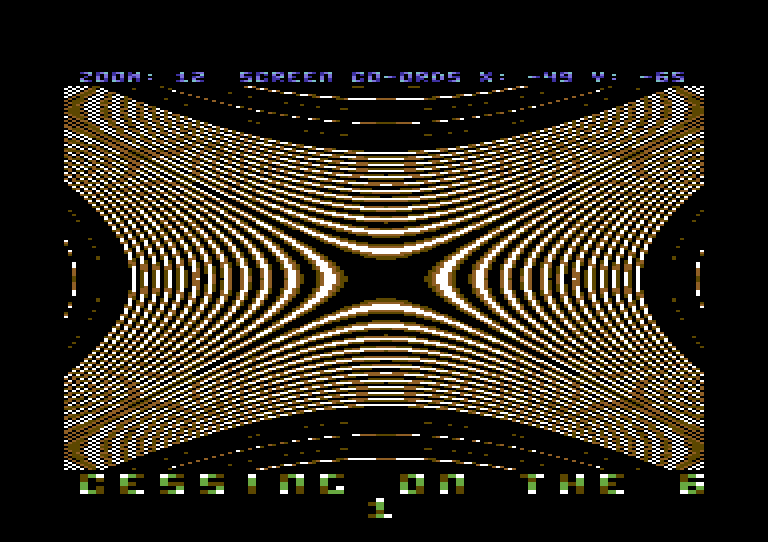 I'd been experimenting with then-trendy fractals at the time, and attempting to find a way to display the Mandelbrot set in real-time on the C=64. I didn't have much luck, but this stage allows you to explore a simpler equation -- sin(x2 - y2) -- in real-time.

The joystick changes the viewport coordinates and zoom factor, in traditional fractal-explorer style.

In the scroller, I note the date as 20/5/89, and that being just after I sat my Leaving Cert exams at school.

The music is by Jeroen Tel of Maniacs of Noise. 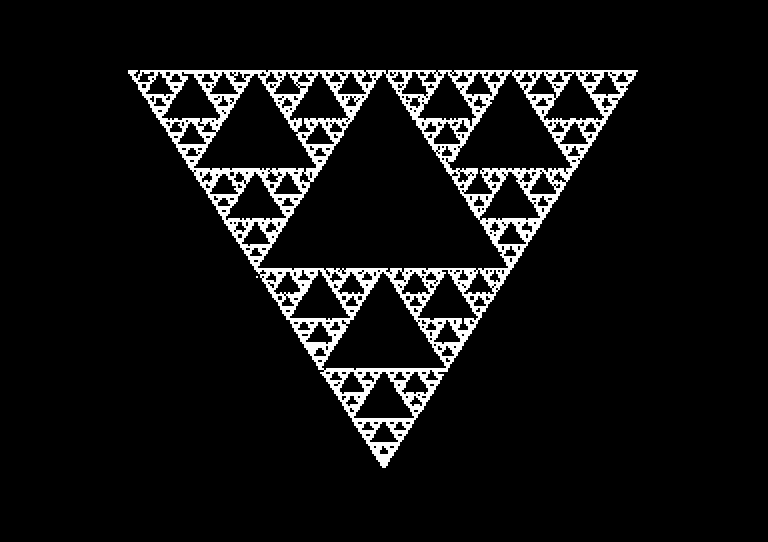 This interlude quickly computes and displays a simple fractal -- the Sierpinski gasket -- until you press a non-space key.

Then it displays some more puerile humour while decompressing, before: 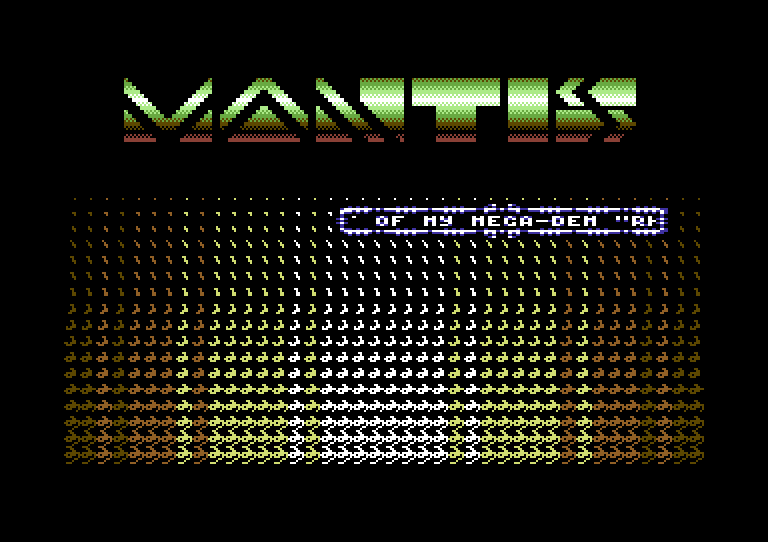 I'm quite fond of this bit -- up at the top, there's what exocet called an "Amiga-res raster"; my handle, Mantis, with what appears to be hundreds of smoothly-interlaced colour gradients scrolling upwards across it, using a variant of my trademark high-res sprite/background interlacing trick (as seen in the intro screen).

Below that is a scrolling message "window" moving around the screen in a sinus pattern, overlaid on top of hundreds of tiny, identical squiggling sinuses.

The joystick changes the colours used in the "Amiga-res raster".

The music is by Jeroen Tel again.

In the scroller, I natter about indie music, give out about the moribund nature of the c=64 games scene, but wax lyrical about the brilliance of the (then just-released) Tetris! 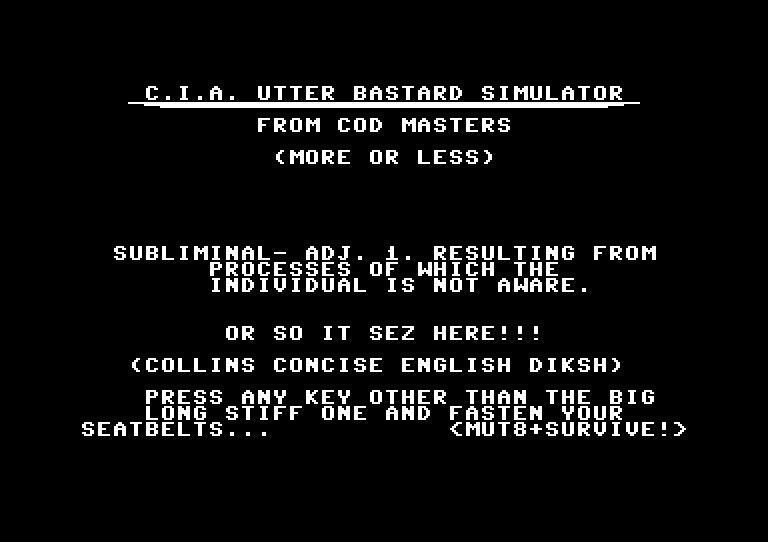 I think there's a short scrolling message being displayed as subliminal messages in this part.

Hit a non-space key (in fact, hold it down) to move on to the star attraction: 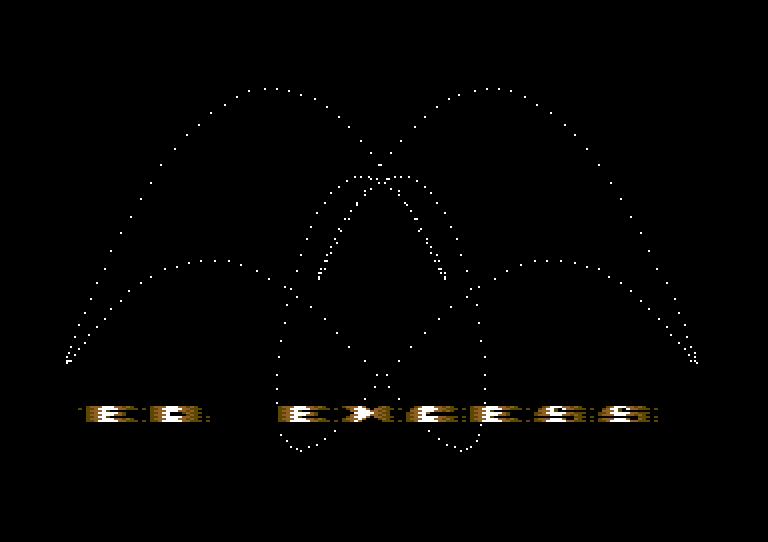 255 points moving in a range of sinus patterns. I was very happy about this

I don't think anyone had done a sinus with that many points on the Commodore 64 prior to this demo.

Joystick controls: up/down moves through the list of sinus patterns. I strongly recommend you cycle through a few; the one it starts with isn't too exciting, and some of the others are much more interesting.

The music is fantastic; it's by Matt Grey, from The Last Ninja 2, says Ahriakin/Exocet.

And that's the lot. I'm still quite proud of this demo; I spent months on it, I think, back in 1989, and it's full of little memory triggers of sitting in my bedroom poring over the Action Replay monitor, or tweaking some animation, etc.

Unfortunately, either this isn't the demo that uploaded a little program to the 1541 disk drive to flash its activity light in time with the music, or VICE doesn't emulate enough of the drive's firmware to support that. (I suspect the former, since none of the scroller texts refer to it.) So there's still one more demo I need to track down

It's hard to get an idea of where it fit in in terms of demo scene history, and in fact I don't think it was distributed widely enough to get noticed. C'est la vie!